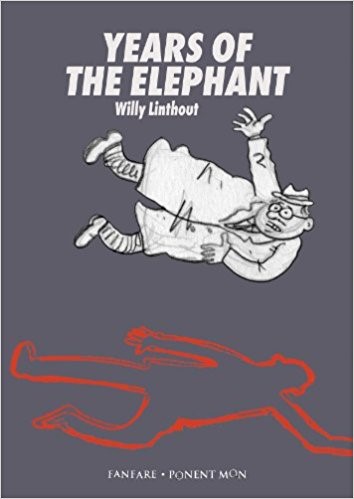 The years may pass, but elephants never forget. This becomes the central theme of Years of the Elephant, as how could any parent forget the loss of a child due to suicide? There is no escaping the constant reminders and unanswered questions.

Willy Linthout creates the character Charles Germonprez as his alter ego in Years of the Elephant. Willy is a businessman in his 50s living with his wife, Simone. The story begins when the couple’s son, Jack, leaps to his death off the roof of their apartment building. There’s no apparent warning; no sign that this is coming. Linthout appropriately starts the book with a typical day in the Germonprez house until everything is suddenly shattered by the arrival of police bearing the bad news of Jack's death.

From this point on, we journey with Charles in the days, months, and years that follow. Jack was Charles’s only son, and the loss becomes a lingering specter. At first, Charles goes about his daily life as if nothing changed, but eventually the trauma triggers a series of mental breakdowns. During this slow descent into madness, Charles uses benign coping mechanisms that rapidly turn into dangerous delusions, causing him to break with reality. Ultimately Years of the Elephant leaves us with the rather sad ending that no matter what, Charles will never be normal again. The suicide of his only child will haunt him for the rest of his life, and he has been forever altered in the process.

Linthout draws Years of the Elephant in a slightly rough, unfinished, and un-inked state. It’s sketched like a Sunday morning newspaper cartoon, and some of the dialogue in the beginning reads in the same tone one might expect from Doonesbury or Ziggy. But despite the deceptively comic strip-like tenor, Years of the Elephant is a dark book. Linthout drapes a light surface level of frivolity over top his story, but the more you read, the more chilling the book becomes.

Charles’ character deals with depression triggered by his grief in losing his only son. As such, some of the classic symptoms of depression are not observed. However, we witness Charles begin to lose interest in many of the things he once found pleasurable, moving away from his remaining loved ones and shutting himself up in his own world. He is plagued by constant feelings of guilt, worthlessness, and emptiness that manifest in delusions of reuniting with his son. In these visions, his son has transformed into a misshapen chalk outline, devoid of his real identity.

One of the most interesting aspects of Years of the Elephant is the role of Charles’s wife Simone. We see her in the first panel of the book, vacuuming the floor, her face in profile and mostly hidden by hair. On the second panel she’s halfway out of view, overshadowed by the ominous thud outside that sets the story into action. From that point on, she’s gone from view of the reader. Sometimes, we experience Simone’s words from an off-panel dialogue, or rarely we’ll catch a glimpse of her hand for a split second. This is intentional, as it becomes symbolic of Charles losing sight of his remaining loved ones. Even when Charles finally realizes that Simone is still there in his life, it’s too late. The metaphorical chasm that has grown between them erupts within their apartment, perhaps impossible to ever cross and repair. It’s left to the reader to decide the outcome.

This text might be suited best for individuals who are suffering from depression and grief as a result from the loss of a loved one.