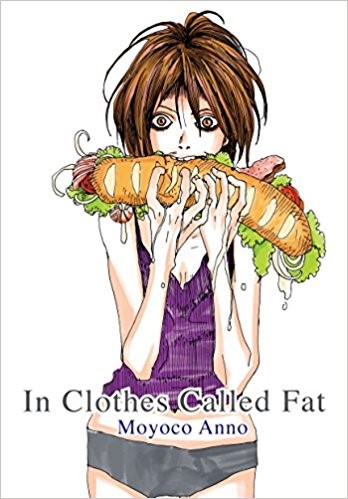 In Clothes Called Fat centers around Japanese office lady, Noko Hanazawa. In Japan, OL’s are more or less the equivalent of administrative assistants in the United States. This is also the standard go-to profession for most young Japanese women before they get married. Noko, in this regard, is a typical Japanese woman in her early 20s, save one factor: she is overweight. In a profession where being young and attractive is considered standard, Noko is bullied by her coworkers for her weight issues, and she is often verbally abused by her boss who sees her as an easy scapegoat. Noko’s personal life is not much better, as her long-standing boyfriend cheats on her. Due to her weight and self-esteem issues, Noko does not confront him about it despite the fact she loves him very dearly and his betrayal hurts her more than anything else in her life.

To deal with her stress, Noko often binge eats, which only continues the cycle of self-loathing and abuse in her life. One day Noko channels her obsession with weight in a new way and beings to convince herself that all her problems will go away if she loses weight and becomes attractive. This quickly leads her down a road of even more dangerous and destructive behavior as she becomes more and more certain that happiness will finally become obtainable if she can just shrink her waistline. Within six months, Noko succeeds in doing this, dramatically changing herself from a dumpy, overweight woman to a glamorous, albeit dangerously skinny social butterfly. But happiness is not obtained through weight loss, as she wanted. Noko’s boyfriend turns out to be a weak, cowardly man who becomes so intimidated by her transformation that he breaks off the relationship with her and begins to date another “fat” girl. When she sees him again half a year later, Noko realizes that the man never loved her in the first place and that she was simply a way for him to feel powerful and fulfilled. Her boyfriend is a man who is only comfortable when he dominates a relationship. He sees himself as a handsome, successful guy who pity-dates overweight women out of the goodness of his heart. After realizing this, Noko continues a new life that is changed by the perspective that there is no easy road to being happy. The book ends with no real conclusion or solution.

As previously mentioned, the book is purposely ambiguous. No one tries to amend Noko’s behavior or get her the mental health care she needs. Ultimately, she has no great moral epiphanies and simply continues on. This was intentional, partly because there is a huge stigma about mental health in Japan, so the grim reality remains that most people who suffer from disorders of this nature do so in silence. In this fashion, Anno tries to subtly give a face to the world of eating disorders in East Asia since this disease is still typically seen as only being a Western problem. Instead, she illustrates that eating disorders are universal and their ugly reality is often hiding in plain sight.

Anno is famous in Japan for being one of the artists at the forefront of the josei style. These comics are typically aimed at women in their late teens and older (the word josei means feminine). Most josei comics feature realistic plots that differ from other manga in Japan. Instead josei books are usually romance-focused, centered on slice-of-life stories that often have homoerotic and adult themes. Anno in particular frequently writes stories that feature a female lead, often drawing them doll-like, with wide eyes and almost grotesquely thin. This may be because Anno is also a fashion writer, and it is apparent her work in the clothing industry influences her manga illustrations.

Individuals with eating disorders often feel guilt and shame following an episode of binge eating, which later triggers them to restrict food. There is often an emotional element to this with personal reminders like, “I am eating this apple, but because I’m a terrible person, I won’t allow myself to eat one tomorrow.” You see this portrayed constantly at the beginning of the book as Noko fluctuates between using food as a self-soothing method and then absolutely hating herself for it later. Also, as Noko continues to starve herself, you see how she actually starts to embrace her feelings of hunger as a method of control. Her pain and feelings of want are temporary, and if she can just push past them, she’ll obtain happiness. One of the textbook examples of those suffering from anorexia nervosa is often a sense of achievement from denying oneself food, and this is a common theme witnessed throughout the book.

Anno delves into the experience and mystery of Japan’s cultural fascination with beauty through the unsparing episodes the readers get from Noko’s life. Her sex life with her boyfriend, the bullying she experiences at work, her abortive attempts at self-control…all show that Noko is victimized by her own lack of self-confidence and hatred of her own appearance. Often she is her harshest critic, and there is always a judgmental tone in the book. The visual objectification of the book’s characters permeates the text. For example, Noko is often illustrated naked. This is purposeful so that she that her body can be scrutinized and judged by us, the audience. At the end of the book, the sexual objectification and judgment are still there, but it has almost become resignation. Even with the skinny, “attractive” body she now has, Noko isn’t happy, and she still isn’t beautiful. That critical lens is just as looming and apparent as it was when she was overweight. Subtly, this seems to be Anno’s way of showing us that the world was just as ugly as it ever was, and nothing in Noko’s reality has really changed.