Graphic Medicine Novels: The Best We Could Do 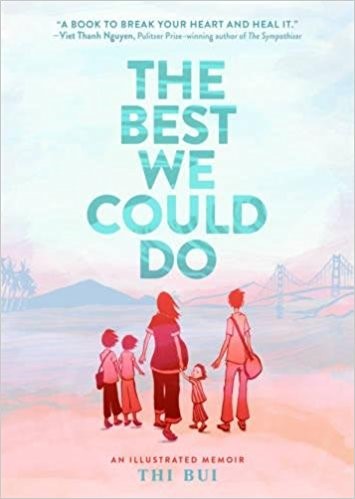 The Best We Could Do asks the reader how well a person can really know their parents. That’s the question Thi Bui grapples with as she navigates being a first-generation American citizen with her Vietnamese parents who were refugees who came to America after the fall of Saigon. From the beginning, Bui knows that her parents were deeply traumatized by their past, but she never felt comfortable asking them about their experiences. This changes, however, when Bui gives birth to her son. As Bui holds her new baby, she begins to appreciate the immense responsibility that comes with being a parent and decides to learn more about her parents’ past.

As she learns more and more of the horrible trauma her parents have endured, she states that “If I bridged the gap between past and present…I could fill the void between my parents and me” (p. 40-41). From this heartfelt attempt to understand their pain, the narrative flashes back and forth in time, illustrating how larger events like war, dictatorship, and immigration wound up shaping the family.

Bui’s father, in particular, had a very traumatic, uprooted childhood in the 1950s, and he endures intense periods of living as a refugee with his abusive father while dealing with dire poverty and war surrounding him. Similarly, Bui's mother was shielded from the conditions Bui’s father and much of the country faced, but she still experiences her own trauma. After marrying Bố, Má gives birth to multiple children, usually under extremely difficult conditions, which leaves her with PTSD.

Eventually, Bui’s family were among those who fled oppressive Communist rule after the Vietnam war ended. Sadly, the couple’s troubles didn’t stop after arriving in America, as they not only have to deal with culture shock but racism as well. Bui’s parents are educated people, but their degrees are not recognized in America, which results in the couple having to settle for minimum wage work and years of night school in order to better their circumstances. Bui vividly describes these early years of her childhood, while she is stuck at home with her father and forced to cope with his off-putting, distant demeanor and his scary superstitions and paranoia, which are a result of his PTSD. From this story, Bui realizes that, in a sense, she too is a product of war. She uses this knowledge to get a better understanding of how she can change things for the better for her child, and perhaps, in a small way, turn the terror that occurred into something positive for the next generation.

Bui’s art is gorgeous. Her line work is simple and utterly expressive, with simple black-and-white washes accented by a pale orange that reminds the reader of rusty blood. With this simple color scheme, she conveys every emotion in her comic with raw and understated power. The orange permeates everything, and you can truly feel Bố’s sadness and shame, along with perhaps a resigned hope that the future can be better.

One of the characteristics of PTSD is the avoidance of triggering situations, which both of Bui’s parents exhibit frequently throughout the book. They actively stay away from places, events, or objects that remind them of their traumatic experience. When Bui is in labor, the whole childbirth experience is so traumatic for Má that she has to run from the room leaving Bui to face her first time giving birth alone. Her mother does not return until several hours later, with a warm smile, trying to pretend the whole thing didn’t happen, even though she is still visually very shaken by the event.

The Best We Could Do, which focuses on the personal experiences of refugees, is particularly timely, especially considering the mindset of many in political power and the way legislation related to refugee immigration is taking shape. Bringing humanity and giving a face to those who suffer through war and trauma at the hands of their government and ours is something desperately needed right now, thus making this book an incredibly important title.

This book was considered for exclusion do to the fact that many other themes are present, besides Bui’s parents' PTSD. However, it has complex humanistic elements that are crucially connected to mental health. Please be warned that there are adult themes, including death, war, and racism throughout the story.