Graphic Medicine Novels: Hyperbole and a Half 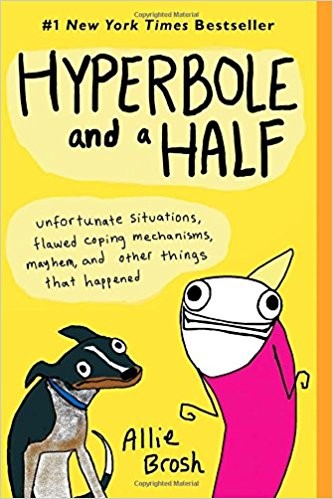 Hyperbole and a Half is a print compilation of the webcomic of the same name, consisting of brief vignettes about Brosh’s young life. The book goes through the many exploits of the protagonist, from dinosaur suits that lead to reckless, damage-inducing frolics, to insights about her two dogs and their humorously illogical inner thoughts. In the chapters titled “Adventures in Depression” and “Depression Part Two,” Brosh vulnerably describes her struggle with the mental illness. In these chapters, Brosh has created incredibly relatable portrayals of depression, resulting in Hyperbole and a Half being hailed as one of the most insightful depictions of the disease to date.

The driving force of this book is definitely Brosh’s humor. While there is a lot of self-revelation in her writing about depression, there is no self-pity and that is what makes her writing powerful. Brosh can be self-deprecating at times, often portraying herself as the weird outsider, but we can all relate to her struggles. She draws with a purposeful roughness and uses the simple computer program Paint to create her illustrations. In her work, she focuses on facial expressions and body positions to emphasize meaning throughout the panels. The protagonist in her stories (which is Brosh herself) is portrayed on the pages as a wide-eyed, stick figure topped with a blond shark fin, usually wearing a simple pink dress or her “depression suit” which is a gray hoodie with dirt smudges.

It is important to note that depression is not just having a negative viewpoint, which is something often misunderstood by those who don’t suffer from it. Depression is an illness that warps a person’s perceptions and interactions with reality. In the first depression comic, “Adventures in Depression,” Brosh depicts this beautifully by means of negative self-talk, a common symptom of mental illness in which someone verbally abuses themselves often over minor things. In the book, Brosh’s character yells at herself for ridiculously benign things, such as eating pasta and stepping outside, convinced that these actions make her a horrible person. She also showcases other forms of depression, such as emotional numbness, suicidal thoughts, and even paralysis in relation to simple life tasks.

Brosh’s stories are not only relatable to those suffering from depression, but they make it plain to people who don’t have the disorder what this illness really looks like. In “Depression Part Two,” Brosh explains that depression is not something you can fix with hope, you can’t fill it up and you can’t cover it up, it’s just there. She likens the experience of dealing with it as someone having a bunch of dead fish, but no one will acknowledge the fish are dead. People with depression often struggle to respond when loved ones try to be supportive and offer solutions, although their suggestions aren’t helpful. This reality is very apparent in Hyperbole and a Half, allowing many to relate to Brosh’s character.