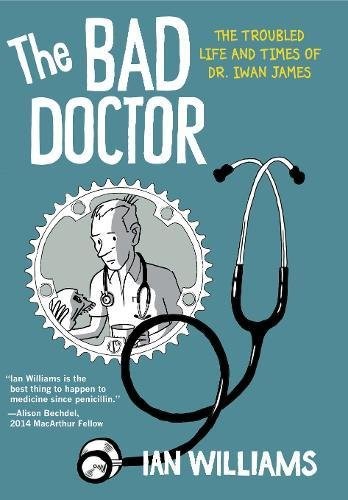 Iwan James is many things: husband, father, friend, and physician. He also has obsessive-compulsive disorder, which was more pronounced in his childhood, but is nonetheless, still present in adulthood. The Bad Doctor follows Iwan as he takes on life’s responsibilities while grappling with the residual impact of OCD.

Throughout the book, Iwan sees many patients. His practice is busy and often chaotic, so it certainly doesn’t help that Iwan second guesses many of his medical decisions. He tries to make time for himself, often taking long bike rides with a close friend. Interlaced throughout the book are flashbacks of Iwan’s struggles with OCD as a child, adolescent, and young man. One of his patients likewise experiences OCD, and Iwan does his best to help him. This brings to light the fact that Iwan does very little to help himself.

The Bad Doctor is well-organized and easy to follow. Content is divided up into perceptible chapters, although there are no chapter names or numbers, only symbols and blank pages to indicate a content break. Williams’s artistic style is straightforward and fairly simplistic although he does apply greater detail in the flashback scenes. The written word is often applied in internal monologue and dialogue.

There is ample evidence of obsessive-compulsive disorder in The Bad Doctor, as can be observed through both Iwan’s character and that of one of his patients. For Iwan, OCD develops as a young child. He starts up a ritual whereby he had to say goodnight to each stuffed animal in a particular order—if he messes it up, he feels that “something terrible” will happen (p. 32). Those rituals continue through childhood, eventually taking on a more religious tone. Iwan obsessively prays for everyone in his life, in a sense taking on full responsibility for their protection and safety. On one occasion, after listening to contemporary music, the neighbor’s dog is hit by a car. Iwan blames himself, stating: “I listened to blasphemous music…and God killed Sammy…I’m sorry” (p. 87). As an adult, Iwan experiences anxiety and apprehension, explaining that he constantly doubts himself: “It’s a kind of malignant doubt that invades everything…and makes me think that everything about me and my life is wrong” (p. 162). He also struggles with control, attempting to find a release by cursing over and over again on a solo bike ride. It is also revealed that he has suicidal ideation without intent, as he often fantasizes about shooting himself in the head.

One of Iwan’s patients presents with OCD, as well, but the particular type that is dominated by intrusive thoughts. His patient fears hurting children and wonders if he is a pedophile, even though he has no sexual interest in children nor has he acted on any intrusive thought in the past. These fears are so severe that he distances himself from his nephews and avoids going out in public.

There are many humanistic revelations found in The Bad Doctor, but one is particularly unique and important: physicians experience mental illness in unique and complicated ways. Mental illness is so common that most physicians frequently encounter it in their professional practice. Many recognize its legitimacy and do their best to help their patients, regardless if psychology is or is not one of their specialties. What is less common, though, is physicians’ ability to adequately care for their own psyches. There are many possible reasons for this, several of which are presented in The Bad Doctor. First, when physicians focus so much of their time on helping other people, very little is left to help themselves. Second, many physicians find it difficult to take their own professional advice—at one point, Iwan admits that he recommends therapy for his patients while avoiding it himself. Just as important are professional barriers that keep physicians from disclosing their mental illnesses. Towards the end of the book, Iwan admits to a work colleague that he often fantasizes about suicide but has no intention of following through. Instead of receiving support from his colleague, he is warned that his disclosure may be a problem for the practice’s insurance. This highlights the fact that medical professionals are often burdened by pressure to suffer in silence.

The Bad Doctor is written and illustrated by Ian Williams, who founded www.graphicmedicine.org and has done much to advance the marriage of comics and medicine. It is evident that he has taken what he’s learned from the graphic medicine movement and applied it to this book. There is much to learn about the unique mental health experience of physicians. It is a highly recommended read for student doctors and medical professionals.