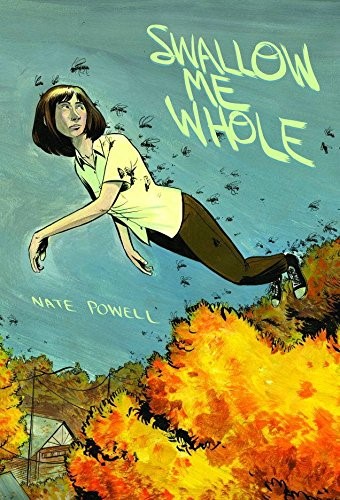 Ruth and her stepbrother Perry seem like ordinary kids—they go to school, have hobbies and crushes on their classmates…but unbeknownst to most of the people in their lives, Ruth and Perry each experience profound mental illness. Both children present with symptoms of obsessive-compulsive disorder and schizophrenia. At the beginning of the book, Ruth is observed perfectly organizing jars of bugs and envisions swarms of insects coming through the air vents. Perry obsessively draws pictures in response to orders he receives from a small but powerful wizard who sits on the tip of his pencil and follows him to school. Despite the discomfort caused by these psychological disruptions, both kids try to fit in and not draw too much attention to themselves.

Although they have much in common, the kids differ in one critical way: Perry strives to say "no" to his hallucinations while Ruth embraces hers. As Perry’s efforts are met with recovery, Ruth’s diagnosis becomes more severe. At school she is accused of being on drugs since no one suspects that mental illness would be the reason for her peculiar behavior. During a volunteer opportunity at a nearby museum, she is compelled to steal one of their stuffed specimens: a bullfrog. When her parents find out about the theft, they search for the bullfrog and find it hidden behind Ruth’s collection of preserved insects. Ruth comes home to find her meticulously organized collection haphazardly packed up and the boxes scattered. The resulting internal chaos is too much for her, and she succumbs to her mental illness, effectively being "swallowed whole".

Nate Powell’s artistic skill is clearly evident in Swallow Me Whole. Fitting with the theme, the artwork is extremely dark with cross-hatched, splattered, and solid black ink. There is no running text, only internal monologue and dialogue. The written word is applied in a symbolic manner, such as through wispy, elongated text indicating whispers. When words and images combine, the reader effectively experiences the hallucinations of the children, and in the end, it is the reader who determines what is and isn’t real.

There are many signs and symptoms of mental illness observed in Swallow Me Whole. Within the first few pages, Ruth's OCD is evidenced through her compulsive need to arrange objects in a specific manner. She explains: “At times, arranging and reordering were all I could do to handle the day. Didn’t know they had a name for it and everything else. Early on, I thought I’d found a way to exercise just a little control over my world…” (p. 20). This symptom is seen again when she finds herself running late for class due to the time spent at her locker making sure everything is perfectly organized. Additionally, while some people with OCD avoid stepping on cracks in the pavement, Ruth avoids stepping on bugs.

As Ruth embraces her psychological differences, her symptoms of schizophrenia become more pronounced. She regularly experiences delusions, especially related to the insect kingdom. In fact, it is later revealed that she collects them due to a belief that they act as diplomats from the insect world. When her mind is almost fully compromised, she admits she feels as though she is on a religious mission, effectively demonstrating another common symptom of schizophrenia: spiritual delusion.

One of the greatest insights in Swallow Me Whole is the incredible bond that can exist between people who share a mental illness. This is deftly portrayed through Ruth and Perry’s relationship. The two children lean on one another, each using the other as safe outlets with whom to discuss and examine their own mental illness. This sort of symbiotic relationship can be both positive and negative. On the one hand, their relationship provides a healthy opportunity to talk about what they’re each experiencing. On the other, when Ruth embraces her delusions, Perry’s recovery is threatened by the same tendency. Another complexity revealed in the book is the way individuals who experience delusions struggle to understand if their visions are somehow real. This line of thinking often spurs individuals to explore what it could be like to embrace their delusions thus abandoning their pursuit of recovery.

Swallow Me Whole is a fairly complex book. Not only can the plot and illustrations be hard to follow, but there is no happy ending. For that reason, it is recommended for older teens and adults who can examine its contents in a critical manner.