Graphic Medicine Novels: Inside Out, Portrait of an Eating Disorder 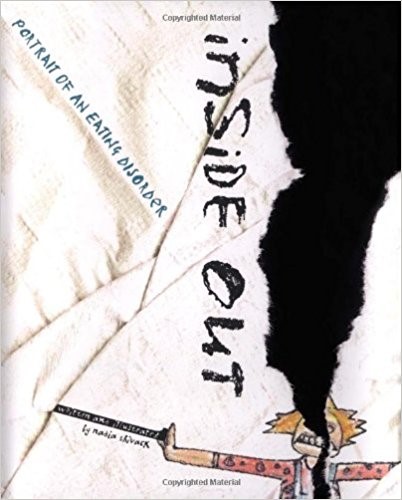 Inside Out is a graphic memoir that depicts how Shivack met Ed, her eating disorder. The story begins by introducing us to Shivack’s mother, who was a Holocaust survivor, and as such, insisted her family finish everything on their dinner plates regardless of whether or not they were hungry. At a young age Shivack realizes that food can be used as a means of control. As her eating habits become more strained and complex, Shivack conceives of a monster named Ed, a visual representation of her growing issues with food. Ed changes shape throughout the story, sometimes being sinister and inhuman, other times being handsome and taking the form of her ideal man. This occurs as a main plot point to show that during different times in her life, Ed becomes different things to Shivack. Although the form changes, he remains exciting, but ultimately dangerous, as all eating disorders are.

In the author’s commentary, Shivack states that the story for her memoir began when she was in an inpatient unit getting treatment for anorexia nervosa. She would color on her napkins after every meal as a way to tame the voices in her head and distract herself from the fact she was actually digesting food. Later as she got better, the story would evolve to incorporate notebook paper and photographs. Style-wise, the drawings are rudimentary and raw, with the plot at times hard to follow and feeling very erratic. The thought bubbles of text, such as those that connect to the napkin drawings, exist to become a sort of “yellow brick road” to keep the reader on track as to what is going on in the story. It is clear after just a few pages that the book is driven by emotion rather than plot. We aren’t supposed to make sense of a lot of what Shivack is going through—we are simply supposed to feel this daunting experience.

One of the key points at which Ed starts to physically manifest is when Shivack begins to swim competitively in high school. Upon inspection of the swimmers, her coach criticizes those swimmers who need to lose weight, and Shivack instantly felt that she was being called out as someone in that category. In a textbook example of display by those suffering from eating disorders, young Shivack launches into an extreme regimen of binging, purging, and compulsively exercising. The drawing used for this is especially poignant, as she likens her daily routine to a perilous climb up a steep, jagged mountain.

In the afterword, Shivack confesses that she been hospitalized several more times since the book was first conceived and illustrated. She goes on to tell the readers that there is no easy fix for mental health and urges the readers to not let those suffering from the disorder feel isolated and alone. Shivack ends the book hopeful that there is a chance for all of us to recover.

The intended audience is middle- and high school-aged adolescents.