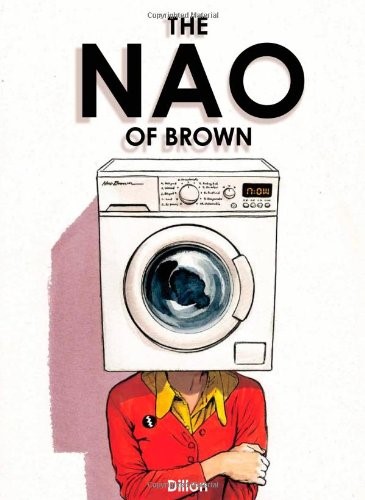 The Nao of Brown is a fictional work depicting the psychological struggles of Nao Brown, a young woman of English and Japanese ancestry. Nao has Purely Obsessional OCD, a type of OCD that causes a person to experience intrusive thoughts, which are often violent, sexual, or otherwise uncomfortable. Although Nao has dealt with intrusive thoughts since she was a teenager, the story takes place when Nao appears to be in her mid- to late-20s.

Recently single, Nao returns home to give her life a “reboot.” She starts working at her friend Steve’s store selling Japanese toys. While at work, Nao sees a man who reminds her of a character from a beloved Japanese show. Overcome by interest and attraction, Nao hatches a plan to meet him. Knowing he is a washing machine repairman, she intentionally damages her own washing machine and calls in a repair request. The plan works, and she meets the man named Gregory. Before long, the two are dating.

Throughout the book, Nao is repeatedly overcome by violent intrusive thoughts. Although she does try to keep her ongoing psychological disturbances a secret, an argument with Gregory prompts the truth to come out. He seems to take the news moderately well. However, the following day, Gregory suffers a stroke. While at the hospital, Nao imagines stabbing him in the chest. The thought disturbs her so greatly that she runs out into the street and in front of a quickly moving vehicle. Her near-death experience shifts her worldview enough to create a window for recovery. In an epilogue set 4 years in the future, we see that meditation has helped Nao achieve peace. We learn that she has had a child, and that while she loves being a mother, she worries he will inherit the same mental illness.

The Nao of Brown is truly a work of art. Glyn Dillon’s illustrations are lifelike and heavily-detailed, accompanied by muted tones that create a feeling of melancholy. The color red is sometimes featured, often for symbolic purposes. The juxtaposed text is primarily a combination of dialogue and Nao’s internal monologue. Through word and image, Dillon takes full advantage of the comics medium: by illustrating Nao’s visions as if they were actually happening, the reader is able to step into the mind of someone experiencing Pure-OCD.

Although not mentioned in the summary, it should be noted that The Nao of Brown features a story-within-a-story. Throughout the book, there are sections of pages devoted to a companion tale about a fantastical character called Pictor, who is half-man, half-tree. While there are some parallels between Pictor’s story and Nao’s story, the two could be read independently of one another.

Nao’s OCD manifests primarily through violent intrusive thoughts. Throughout the book, we see vivid portrayals of Nao’s uncontrollable mind, as she imagines committing the following murderous acts: snapping a cab driver’s neck; opening the emergency exit on a plane while mid-flight; shoving a man in front of a train; stabbing a man in the neck with a pen; running a child over with a bicycle; stabbing a hairdresser with a scissor; and breaking a glass into Gregory’s face. To combat the intrusive thoughts, Nao turns to ritual, a textbook symptom of OCD. To calm her anxious mind, she repeats the following: “Mum loves me…Mum loves me…Mum loves me” (p. 9). These positive thoughts cancel out the negative ones.

In addition to intrusive thoughts and ritual, Nao experiences tremendous anxiety. Although she has never hurt another person, she is terrified that she will follow through on one of her visions. She explains: “The anxiety is crippling, the thought that…I might just do that, that it could be that easy…The need to get that thought out of my mind only serves to entrench it all the more. An endless whining spin cycle…I can’t get out.” (p. 111). As a result, Nao avoids situations that tend to produce intrusive thoughts or modifies her reality to achieve the same result, such as by hiding all the pens at work so that she has no weapon available with which to stab a customer.

As can be observed in just about every book in this collection, Nao prefers to keep her mental illness a secret. The book opens with a photo of Nao as a 13-year-old. She considers that anyone looking at the photo would probably only see a cute and innocent girl. She goes on to say, “Little do they know that I’m a fucking mental case” (p. 8). Later in the book, she does, in fact, reveal her condition to her boyfriend. He laughs at the absurdity of her visions, prompting Nao to respond angrily. Herein lies a reason why many with Pure-OCD keep their diagnosis a secret: the fear of not being taken seriously.

Through Nao’s diary, we get a sense of why she is so terrified by her intrusive thoughts. After imagining herself stabbing a pregnant mother in the belly, she writes: “I must be having these thoughts because I’m mental…I’m a psycho, and I want to do these things. Maybe I’ll lose control and really do it. If I did act on this, they’d lock me up forever—and I’d deserve it. My poor Mum—That would be awful for her—AND ME! Her & Dad, what would they do? They’ll suffer so much because of what I did to them…and to that baby and that mother. I won’t be able to live with the guilt. I’d either die in prison or I’d kill myself” (p. 121). After reading this, it’s not hard to understand why she takes such great lengths to avoid situations that might produce these feelings.

Although this is a fictional work, Dillon does a remarkable job of illustrating the internal struggles experienced by a person who has OCD. In my experiences leading group discussion of The Nao of Brown, I have found that some readers can find the story-within-a-story to be a tad confusing. Readers who share this sentiment are advised that the humanistic revelations contained within The Nao of Brown can be fully appreciated without fully understanding (or even reading) the companion story. Those pages are easily identifiable, as they have a black border and background.