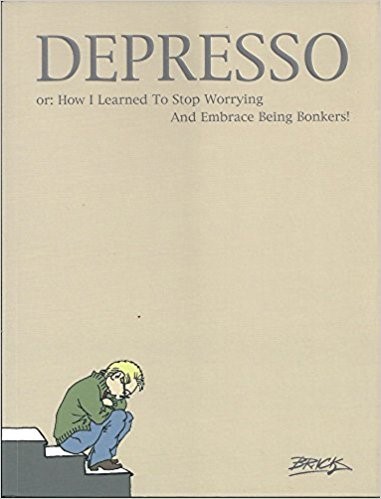 Depresso is part travel log and part mental health odyssey. Tom Freeman journeys through different countries and health systems as he tries to cope with his severe depression. The story unfolds over the course of several years, as Freeman and his wife travel around the world. During this time, the anti-depressants he takess reduce Freeman to a zombie-like state. The alternative therapies Freeman also tries are varied and often lead to comical situations. It is the same alternative therapies that eventually drive Freeman to move away from traditional western medicine. As the book progresses, he begins to lean more and more towards holistic forms of treatment. His constant companion throughout this story is a giant white lizard, who acts as the “Jimmy Cricket” of Freeman’s conscience, often helping and sometimes hindering his recovery as they brave the mental health wilderness together.

Brick is a political cartoonist by trade, so Depresso very much embraces that art style, along with a heavy use of mixed media photographs and collages that are wedged in with his drawings. Brick plays heavily on the use of metaphors when portraying his bouts of depression, as the illness often takes on strange, fantastical forms that overpower the pages. This detachment from the real world is further emphasized by the fact that Brick’s bosom companion in the story is a giant lizard who dominates the dialogue more frequently than Freeman’s wife or other real life characters.

Depression comes in cycles; it comes in waves. This theme is frequently illustrated throughout the book. Sometimes Depresso seems repetitious, like you’ve seen the exact story unfold just a few pages before. However, Brick uses this as a powerful tool to show how the disorder revisits affected individuals. Despite the book's happy ending, Brick really drives home the stark realism that this is a lifelong illness that one simply can’t banish. One has to get comfortable learning to live with “being bonkers."

The book painfully describes the feelings of withdrawal someone experiences when they decide to go off their medications for depression. This is a very rarely explored topic in mental health memoirs. While it might not be an easy read for those who have experienced it, it’s an important one.

Triggers: some nudity and sexual situations.