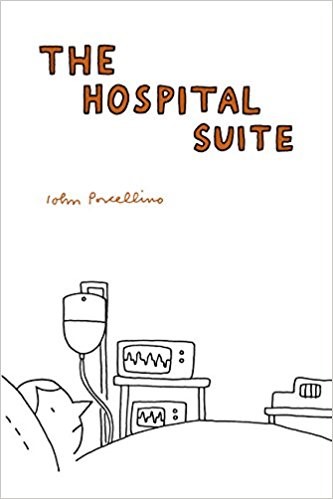 The Hospital Suite begins in 1997, when our hero, John, begins to have severe stomach pain. He soon discovers he needs emergency surgery to remove a benign tumor from his small intestine. In the wake of the surgery, John has numerous health complications that lead to a flare-up of his preexisting tendencies toward anxiety and obsessive-compulsive disorder. These lengthy OCD attacks soon make his creative endeavors, day job, and relationships nearly impossible to maintain.

The book is broken up into several sections, mostly dealing with John’s mysterious physical illnesses. It is not until the section “True Anxiety,” which starts two-thirds of the way into the book and lasts until its ending, that we see in full view John’s ongoing battles with severe anxiety and OCD.

Porcellino’s style is known for the use of loose, minimal lines. His work is almost deceptively simple, with spare drawings and dot-eyed, noodle-limbed figures filling the pages. In many ways, this style is reminiscent of childhood drawings, but he uses this simplicity to make the severe, adult situations depicted in the book all the more powerful.

One of the classic signs of OCD is repetitivethoughts or obsessions. We see this portrayed throughout the “True Anxiety” chapter. Despite having a very severe physical illness, it is the little tics, like whether John turned off the living room lights or locked his storage unit, that seem to truly plague him.

Other examples of this occur in the obsessive way John begins to wash his hands in order to drive off potential illness, how his Catholic guilt morphs into a strange fascination with self-flagellation, or how John constantly checks and rechecks his actions to the point his wife is driven to consider leaving him. In this chapter, Porcellino writes, “One of the worst things about OCD is that you're only partially crazy…At the same time one half of your brain is making you do all this nutty stuff...the other half is telling you how ridiculous you are for doing it” (p. 205).

The Hospital Suite is a rare gem in that it demonstrates how physical illness can infiltrate one’s psyche and turn both mind and body against oneself. One of the worst things about illness, apart from the pain, is how intrusive it can be. Fall sick and your privacy suffers in ways you can never imagine. Fall mentally ill and all of that intensifies even further. With that said, there is a rare humanity and desperate desire to be heard in Porcellino’s writings. He is asking not for pity but for understanding. Often when people deal with illness, the people around see them at their most frail, and that can take a mental toll. The book is a window into those scenarios, asking readers to revisit their reactions and remember to be compassionate.