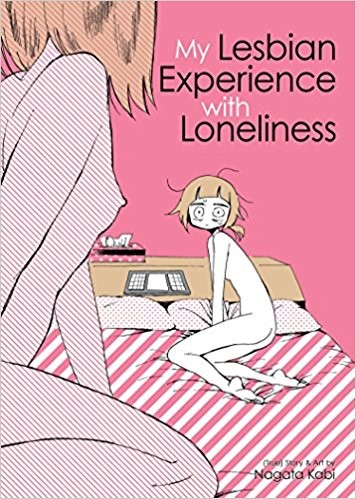 Kabi Nagata’s My Lesbian Experience with Loneliness follows the painfully shy, socially anxious narrator, Kabi, through her first sexual encounter, in which she hires a female sex worker to meet her in a Japanese love hotel. From this awkward encounter, our narrator then goes backward in time to tell us how she got to this point in her life. At its core, My Lesbian Experience with Loneliness is an extended therapy session or support group meeting that Kabi has turned into illustration and word. Kabi narrates for us that while’s she never been actually diagnosed with anything, she struggles with cutting disorders, severe depression and binge eating. We get glimpses of her fight with these disorders as she also tries to navigate her new, budding sexuality.

In order to fully understand My Lesbian Experience with Loneliness, you also have to take a step away from Western society. In Japan, mental illness is still seen with an extreme stigma, and most people who have disorders do not seek treatment out of fear of being shunned by family and friends. Historically, people who had depression were simply seen as lazy, and Japan is still notorious for this mindset surviving today. Many people take the attitude that you simply need to try harder, and that mind over matter can win when facing these types of mental illnesses.

Also, in Japan, seeking the approval of your parents in both your professional and personal lives is a giant part of one’s identity. If you aren’t doing something for yourself, you’re doing it in the hopes of being recognized. In the manga, Kabi expresses often how there are two versions of herself: the one that lives to please her family and the one that longs to please herself. This exacerbates her mental illness, as well, when in Japanese work culture, the concept of earning a salary is one step closer to being an adult. Kabi is a “failure” in this department, as she departs from this tradition of finding stable work and, instead, tells her mom that she’d like to draw manga professionally.

Kabi’s writing and drawing are a lot less like what you would find in traditional Japanese manga and a lot more like the Western web comics of Hyperbole and Half and Sarah’s Scribbles. Kabi’s art is very fluid and dynamic and much more exaggerated than typical manga art styles. Instead of relying on the standard expression tropes of Japan, Kabi exaggerates poses and facial features in funny and charming ways, making the characters look as awkward as she feels. She also uses the combination of pink with the black and white ink, which is strangely charismatic and works very well with the flow of her story.

Kabi very accurately displays the symptoms of those suffering from severe depression. It is illustrated in the way that she is completely lax in her personal hygiene and sleeping habits when in throes of a depressive episode. Kabi also illustrates her issues with food as a way to punish herself for not trying hard enough when her depression gets the better of her or for when she feels she fails in being a “productive adult”. This drive for penance causes her to develop an eating disorder, after which starvation leads to her binging. It escalates to the point that Kabi even steals food from her part-time job at a grocery store and will even go so far as to eat dry ramen packets just because she needs to have something in her stomach. This cycle of self-punishment can also be seen in the way she cuts herself as atonement for not living up to society’s expectations, though the book only touches on that part of her mental illness.

In the prelude portion of the story, Kabi finds herself at the library after climbing out of another depressive cycle. Out of curiosity, she reaches for a book about mental illness in children and is shocked upon finding a section that hits close to home. It is a book that illustrates her desperation to connect with her mother, and it makes her come to terms with her sexuality for the first time. Despite the fact that the Japanese still seem to mix sexuality with mental illness (which can be disturbing from a Western perspective), it is the fact that she has to do this in secret, that there is no place for her to turn for information on mental health save combing through old books at the local library that is very sad. It shows, full stop, how far Japan has to go in providing services to people with mental illness.