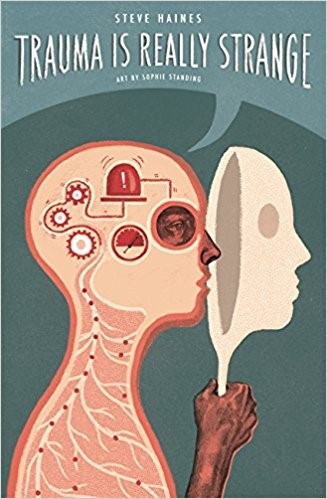 In the book, Trauma is Really Strange, chiropractor Steve Haines and illustrator Sophie Standing try to show the reader an in-depth examination of what happens to our brains when we experience traumatic events. They explain: "The goal of this book is to be a non-scary introduction to trauma. For many people, understanding what the brain is trying to do to protect them helps healing" (p. 5). The main focus of this text is as a science guide to show how humans respond neurologically and physiologically to painful situations. Steve, who takes on the form of a talking head (this character is observed in other books in the Really Strange series), walks us through the different forms that trauma can take and what responses we can expect. Trauma is Really Strange looks at how traumatic experiences can overwhelm us and disable our bodies’ normal processes, leading to a state of dissociation. Through a mix of scientific research and visual metaphor, the authors suggest that changes to the body’s physiology can resolve the deep muscular patterns of stress and trauma.

Having worked together on a previous title, Pain is Really Strange, Steve Haines and Sophie Standing have turned the original book into an ongoing series. Haines is a UK-registered chiropractor and teaches trauma-releasing exercises and cranial work all over the world. Standing is a graduate of Kingston University who is a freelance designer and illustrator. In the author’s commentary, Haines mentions that the first book, Pain is Really Strange, emerged from lectures and talks he had given over the years. From this, Standing and Haines were introduced to one another by a mutual acquaintance and they began to formulate the idea of using graphics to portray a style, reminiscent of the old Disney-esque educational films from the 1950s, that could be both informative and fun.

This book is a visual instruction manual on the psychological and physiological inputs of trauma, so you’ll find countless examples of PTSD illustrated throughout the text.

Trauma is Really Strange is simple and elegant in its easy explanations of how we hold, process and release trauma. It appeals to a vast audience pool, as both laymen and professionals could benefit from reading it. It provides clear and relatable ways of understanding and discussing the effects of trauma, as well as some sensible suggestions for taking the first steps towards recovery.

Recommended for all audiences.