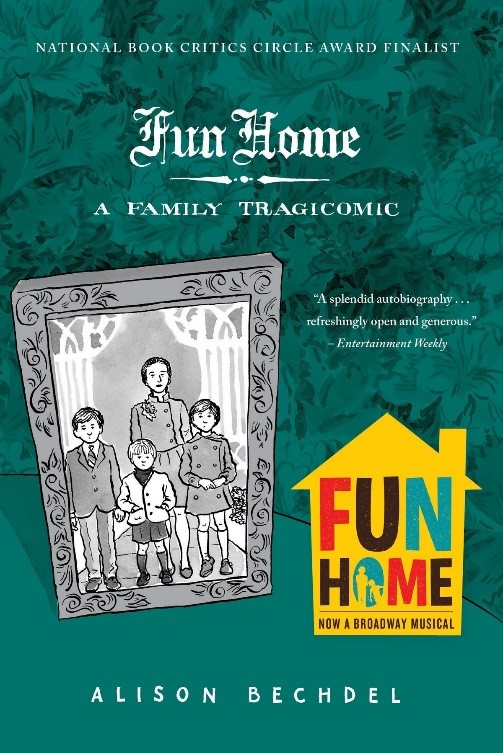 Fun Home is the graphic memoir of Alison Bechdel, a successful author and comics artist with a fascinating story to tell about her childhood. Alison grew up in a small town in Pennsylvania. Her father, a principal character in this book, taught high school English and directed a funeral home. Alison and her siblings spent a lot of time at the funeral home when they were children, even observing their father prepare corpses for burial. Alison reflects on how the unusual nature of her childhood framed her adulthood, especially in regards to her father’s role.

Bruce Bechdel was a complex man. Although he stayed married to Alison’s mother, he was a closeted homosexual who never had the opportunity to examine his true sexual identity. Meanwhile, his unmanaged obsessive-compulsive disorder had a stifling effect on Alison’s home environment as Bruce sought to control every detail related to his home environment. Not surprisingly, Alison developed symptoms of OCD, as well, hers heavily focused on ritual. As she grows up, she likewise questions her sexual identity, but unlike her father, comes out as a homosexual. Shortly thereafter, her father is hit by a truck, which Alison concludes was likely a suicide. Alison attempts to put the pieces of her childhood and adolescence together, hoping to find meaning and joy amidst the trauma.

Fun Home is not written in a chronological fashion, as Alison prefers to move back and forth in time, often covering the same events in different ways. Dialogue is limited, but the written word is not—there is quite a bit of running text. She does divide the book up into seven chapters, though, which helps the reader stay focused on a general topic. Alison’s art is fairly detailed, as she works hard to create a clear image of her childhood memories. The only color present in the book is a dull blue wash, which is applied for shading.

Signs and symptoms of OCD are present in the very few pages of the book. It is first revealed that Alison’s father Bruce struggles with the mental illness. His attempts to control his environment are often focused on his home, a Victorian mansion he spends years refurbishing and reconstructing. Alison calls his obsession a “monomaniacal restoration” (p. 4). Indeed, even when engaging in the work, he never smiles. Uncontrolled anger often affects the rest of the family, as he takes his agitation out on the kids. His hypervigilance prevents him from enjoying time with his family, such as a moment when he stops playing with his daughter to vacuum the rug on which they’re laying. In the end, depression leads Bruce to commit suicide (it is assumed) by stepping in front of a moving vehicle.

Alison also exhibits symptoms of OCD. When she was ten years old, she began obsessing over numbers. Focusing on odd and even numbers, she would spend hours counting out seemingly insignificant things, such as the number of drops from a faucet or the number of slats in the floor. Eventually, her obsessions extended to an unknown substance in the air, which “…had to be gathered and dispersed constantly, to keep it away from my body—to avoid in particular inhaling or swallowing it” (p. 136). When counting did not resolve her concerns, she recited a special incantation. When her rituals were seemingly linked to positive events, she tried hard to maintain them. She also described, at one point, questioning reality itself, constantly second-guessing her own thoughts with the phrase “I think.” Social isolation is heavily present for both Alison and Bruce—the Bechdels don’t spend much time together beyond meals, all seemingly living separate lives within the same house.

There are many humanistic revelations about OCD present in Fun Home, such as the sheer amount of time and effort necessary to maintain unnecessary behavior and rituals. Alison, at one point, describes how “life had become a laborious round of chores” (p. 137). Perhaps more insightful than this, however, is the way in which Fun Home illustrates the effect of untreated OCD on a family. Bruce, in a sense, could not keep his OCD to himself. He projected his illness on his family, expecting his wife and children to conform to his levels of perfectionism. Alison recalls feeling like “extensions of his own body, like precision robot arms” (p. 13). When she and her siblings did not meet expectations or follow instructions exactly, her father transferred his agitation and anger onto them. These memories impacted Alison’s perspectives on space and purpose as she became an adult.

Fun Home is a complex and honest portrait of a childhood. Alison does a fantastic job of illustrating how her father’s OCD impacted the rest of the family. Readers should note, however, that this is one of many themes and stories presented in the book, and to truly understand its message, the book should be read cover-to-cover.