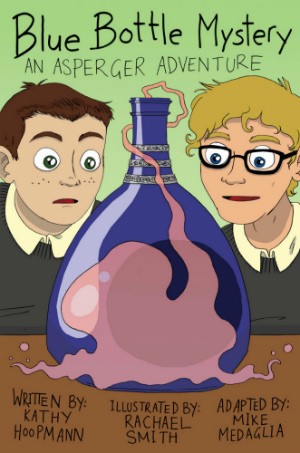 At the outset, we are introduced to our protagonist Ben, a very literal-minded young man who finds every day at school to be a confusing ordeal. With the exception of his best friend Andy, the other kids just don’t understand him. His teachers often get frustrated with his behavior, and at home, his father has problems dealing with him. Fortunately, Ben has several things going for him, such as his wonderful relationships with his grandmother and his best friend. His grandmother is a constant beacon of support in his life—she has an effective way of explaining things and helping him learn ways to cope with his fear of chaos and loss of control. His best friend Andy does the same at school, helping him decode the mysterious ways of his teachers and the other students.

One day, Ben and Andy find a blue bottle buried in the schoolyard and entertain the idea that it might contain a genie that will grant them three wishes. Shortly after making this harmless comment, Ben suddenly wins the lottery and Andy has a growth spurt. These strange events cause them to remember that when they found the bottle, Ben wished for lots of money and Andy wished he could be bigger so that he could join the basketball team. By all accounts, it looks like there actually is a genie in this bottle! But Ben and Andy start remembering some of their other wishes. These more sinister wishes include things like wishing that the school bullies would explode and that school would be canceled forever, so they quickly try to un-wish them. But neither can remember until the very end that first wish they made when they uncorked the bottle.

In the meantime, Ben’s father spends some of their lottery winnings on a psychiatrist who diagnoses Ben with Asperger’s syndrome. She explains what it feels like to be Ben, and she reassures Ben’s father and grandmother that they are doing a good job of supporting him. That turns out to be the moral of the story: Ben is Ben, and his Asperger’s is not going to be “cured,” but as the psychiatrist points out “different” is not necessarily bad.

Blue Bottle Mystery is an illustrated retelling of the book by the same name. The story was adapted by illustrator Rachel Smith, who utilizes the comic medium to show Ben’s difficulties in relating to others through the use of lettering and speech balloons. Often times these images surround and oppress Ben on the page, creating a visual metaphor. As opposed to the original book, the comics adaptation allows the reader to also become an observer of the world around Ben and witness the reactions of those who deal with him. Everything from his perceived idiosyncrasies to the sense that the character is trapped in a reality he can never fully comprehend is clearly illustrated.

Ben shows many of the classic signs of a child on the autistic spectrum. For one, he literally interprets everything that the people around him say. Several examples show that Ben does not relate to sarcasm and hidden meanings in basic conversations, which is part of the reason he struggles with his teachers and fellow students. Ben also shows other examples of Asperger’s through his social awkwardness and selective mutism. During an interaction with his teacher, he is worriedly going over in his head what he could have done to upset her and is unable to answer her when she barrages him with questions. Selective mutism often occurs in autistic children when they are not comfortable speaking freely to strangers.

Suitable for children aged 7-10, or for parents who would like to learn more about the diagnosis.