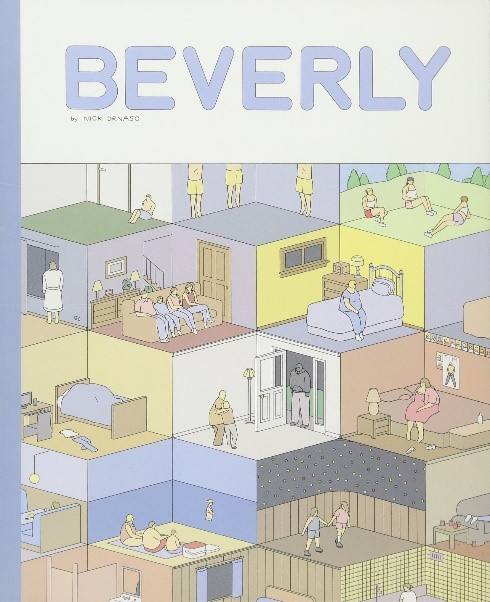 Beverly is composed of several interwoven stories of family life in suburban America. A young man tries to fit in by distancing himself from a socially-awkward co-worker. A mother and daughter attempt to connect by participating in a focus group. A family goes on holiday, but the vacation unravels when their son is caught playing with a girl’s underwear. A girl attends an old friend’s party, but the two realize they’ve drifted apart. A girl fakes a kidnapping to avoid admitting she’s pregnant. A man helps a woman escape from a stranger who is following her. Two stories within Beverly feature the same character, Tyler, who suffers from Unwanted Thought Syndrome, a form of OCD.

Central to Beverly is the portrait of its characters. Each is drawn with bare-bones, thin outlines that are filled in with a pastel color palette. There is no running text or thought bubbles in Beverly, just active speech. That said, what characters are feeling, as well as much of the action, is determined by the reader’s imagination.

Tyler’s chapters—“The Lil’ King” and “King Me”—portray a child, and eventually an adult, who has Unwanted Thought Syndrome. Although only about a fifth of the book is devoted to his story, there is ample evidence that Tyler is experiencing this form of OCD. First, two billboards trigger an unwanted thought—after Tyler sees a billboard for an adult bookstore, followed by a billboard featuring a preacher, he imagines the preacher and a woman (possibly his sister) engaged in sexual activities. Later when getting ice, Tyler encounters a man who he imagines is decapitated. While he is walking through town, a number of people standing outside a shop transform into a pile of dismembered bodies. Finally, Tyler imagines himself as a bigger man, wearing a ski mask, disemboweling a group of boys at the pool. Accompanying these intrusive thoughts is Tyler’s social isolation. He rarely speaks and does not engage with other children his age.

Individuals who have written about growing up with Unwanted Thought Syndrome often comment that “no one knew” what they were experiencing. This is certainly true for Tyler—it is evident that his family has no idea he is experiencing such discomfort as a result of violent and sexual intrusive thoughts.

There are several titles included in our collection that focus specifically on mental illness. Others, including Beverly, tangentially broach the topic. Tyler’s story, embedded in Beverly, highlights Unwanted Thought Syndrome, a common but uncommonly discussed form of OCD. Readers picking up the title for this story specifically can flip directly to the two chapters, “The Lil’ King” and “King Me" or, of course, read the whole book!