Graphic Medicine Novels: With the Light 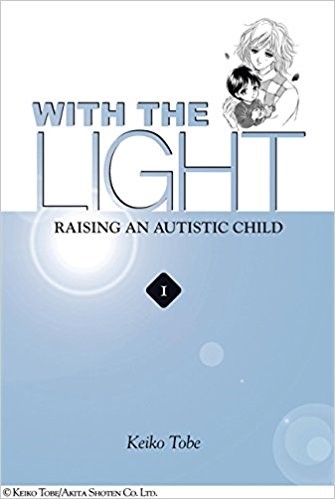 Hikaru (whose name means “to be bright” in Japanese) is very different from other babies. Shortly after he is born, Sachiko and her husband Masato realize that he is not speaking or responding to speech. When they ask one doctor, he says that Hikaru is deaf, but a second opinion from another doctor provides a much more serious diagnosis of autism.

At first, Sachiko has a hard time with the diagnosis and experiences a bout of denial. She is already stuggling at home, given her husband works all the time and barely interacts with her or her child. Then there is her mother-in-law, who is constantly putting her down and blaming Hikaru’s problems on “bad parenting.” Reaching a breaking point, Sachiko finally seeks out a counseling center that helps her realize autism will not go away, and that she needs to change in order to best help her son. The first volume chronicles Sachiko’s journey with Hikaru as he reaches kindergarten age, and how she struggles to find him a place in a school system and world that doesn’t really seem to want him there.

With the Light is actually based on a mother/son pair whom the author met at a school event. All the children there were asked what they wanted to be when they grew up. Most could answer the question, but one little boy could not. He had autism. His mother intervened and replied that he wanted to be "a happy working adult." Seeing the mother be so strong and supportive of her son inspired Tobe to create With the Light.

Tobe is a young artist. As this is her first manga, it shows in her unpolished, wispy-looking artwork. With so many lines all over the place, finding your way around the page can be a challenge. With the Light is categorized as a josei-style manga, which is usually targeted at adult women. These stories tend to focus on realistic stories and contemporary settings to which everyday Japanese women can relate. Tobe draws Hikaru and his mother with the huge, luminous eyes that often represent innocence in Japanese manga. For Sachiko, those huge eyes also make a great illustrative tool to reinforce her pain and confusion. But for Hikaru, they almost have the opposite effect and make him seem inhuman. His glassy stare gives him a doll-like appearance and shows his inability to cope with the everyday world.

Hikaru is a poster boy example of a young child who has low-functioning autism. Early on, it is seen that he has severe impairment of social skills, which include inability to maintain eye contact, inadequate body language, and a lack of emotional or physical response to others’ behaviors and emotions. Even in close contact with his mother, much to her heartache, he never touches her nor responds to her. Hikaru also displays communication impairments, and by the time he reaches preschool age, he can only really repeat back words to people. Every morning when his daycare teacher says, “Good morning, Hikaru,” and he simply parrots back the same phrase, “Good morning, Hikaru” (p. 222), unable to find his own words.

With the Light takes all of its principal characters on a long journey of self-discovery. One of the most powerful scenes was when the husband, Masato, struggles with the anger and stress he feels about his son’s autism, leading him to lash out at his wife. This isn’t the cloying stereotype of an uncaring man with no time for his children. Instead, it’s all too apparent that this is a man too young to be both the star employee his boss expects and a good dad to a son with challenges. As a result, he’s crumbling under the pressure.

At its core, this book is a very true portrayal of that which those who have autistic children face. Hikaru’s parents care for him, love him, and fight for him, but they aren’t perfect. Early on, Sachiko admits tearfully to a counselor that she often hits the child when he won’t comply because she simply doesn’t know what else to do. It takes serious time for Masato her husband to come to terms with the fact that he also has to actively change and embrace who Hikaru is or risk losing his family forever. We see imperfect parents, incompetent doctors, and insensitive neighbors, but we also see kind-hearted individuals who want to learn and help however they can. These portrayals make the book an affecting portrait of how a little consideration for others can make a life-changing difference in the world of parents of children with autism.

Along with a large section of notes, there is a resource material guide at the end of the first novel. It includes supplementary materials on autism and translation notes which can be incredibly helpful to doctors, patients, and parents looking for further recommendations.