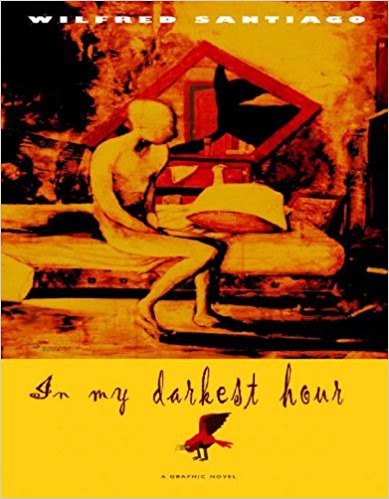 In My Darkest Hour is the story of a rather repulsive young man named Omar Guerrero. Nearly 28 years old, Omar is presented as a loser with a dead-end job who is currently living with his girlfriend, Lucinda, a student considerably younger than himself. Fearful of aging, while indulging in machoism and other forms of toxic masculinity, Omar spends much of the book treating Lucinda horribly in an effort to mask his ever-growing fear and dissatisfaction with his own life.

Omar has so little control over his own life that this fear manifests in an eating disorder, and he frequently binge eats and drinks. He drifts into moods of severe self-loathing when he sees he is gaining weight. This plays into his terror that he is getting old, as he no longer has the fit body of his youth. As Omar continues this cycle of fear and self-loathing, his abuse towards Lucinda and other women in his life escalates. It’s obvious that the behavior manifests as an attempt to assert control over one weaker than himself. As Omar seems to spiral more and more out of control, visions of mutilated women and distorted, horrifying images of himself begin to plague him. Ultimately, Lucinda leaves him, unable to take his abuse and manic behavior any longer, thus forcing Omar to crash to the bottom before realizing he needs help. From this cry for help, we discover that Omar actually is mentally ill, and once he gets on medication to manage his bipolar disorder, the tale ends with Lucinda coming back so they can try to start their relationship anew.

To be frank, In My Darkest Hour has a gritty, disturbing quality to its art that might turn some people off. Visually, it’s hard to read at the best of times, but the images of women in Omar’s hallucinations are grotesque. The imageries shown are graphic, often posing the women of his fantasies in sexually demeaning positions with their mouths sewn shut and other body parts shown either mutilated with open wounds or stitched seams. Emotionally, the book is hard to read, as well. Santiago does not back down from the grim, dark world he creates, and Omar is a very unsympathetic hero, especially when you witness the way he channels his fear and frustration into abuse. This is a powerful book, despite the fact that many may struggle through it. Santiago doesn’t want to endear you to his characters; he wants to force you outside your comfort zone. In fact, the very point of the book seems to be just that, to force his readers to reevaluate just what about mental health makes them feel uncomfortable in the first place and face those feelings.

One of the textbook examples of bipolar disorder is how a person’s mood can swing from irritability to euphoria to depression, all within a short period of time. We witness this several times in the book. For example, something as simple as Lucinda poorly phrasing a harmless comment can send Omar from being happy to experiencing a blind rage, all at the drop of a hat.

Omar is a very real and very uncomfortable example of why many men don’t seek help for their mental illnesses. While abuse is never acceptable, people who experience a strong, dysphoric, manic episode can be dangerous, aggressive, and violent. Many men go to jail because of this behavior when, truthfully, the long-term solution would be to get them psychiatric help. This thought is a hard one to navigate when you are trying to help the bipolar individual and protect their loved ones at the same time. It is this failing on society’s part that the graphic novel brings to light. A lack of resources and understanding is often why mentally ill men in these situations do not get help, and their loved ones and partners are forced instead to suffer in silence.

This book is intense and might be triggering for anyone who has suffered abuse or trauma. There are incredibly disturbing and graphic scenes depicting sexual situations and body dysphoria. With that said, it is recommended for anyone who wants to learn more about the personal experiences some individuals go through in a manic bipolar episode; however, extreme caution is recommended.