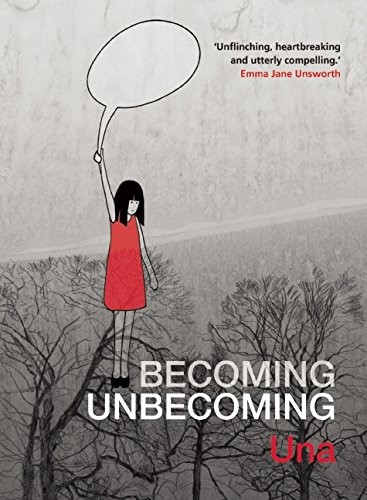 Becoming Unbecoming is a multilayered, expertly-constructed graphic novel that is, at the same time, story and essay. Una shares her personal experiences growing up in the 70s in northern England—occupying the same time and place as the Yorkshire Ripper, a serial killer who specifically targeted women. As such, much of the book is devoted to documenting the Ripper’s evasion of and eventual capture by police. Una recounts how she, herself, was affected by the pervasive feelings of terror and uncertainty shared by women across the country. Meanwhile, Una has her own reasons for experiencing fear: she was the victim of sexual assault, first as a child, and again as a teen. Although Una never illustrates the rape and molestation she experienced, she slowly reveals details that allow her readers to piece together what happened.

Growing up alongside the tales of the Yorkshire Ripper, coupled with the PTSD that develops as a result of her sexual trauma, creates something of a perfect storm for Una. Challenges at school, including chronic bullying, only make things worse. As she grows up, Una adopts an isolated and introspective personality. Attempts to “get better” are met with failure and success. In the end, Una realizes that she can never go back, but still, wonders “who I would have been, had I not been interrupted so rudely” (p. 142). Now, through the power of pen and page, Una breaks her silence, sharing her personal experiences through a powerful treatise on violence against women.

Una has a lot to say, so naturally, Becoming Unbecoming is a bit of a heavy read. Despite this the dialogue is used very sparingly. In fact, the book reads more like an illustrated essay than a typical comic. Una’s multifaceted artwork keeps the reader engaged. She employs a creative approach to page-layout, sometimes opting for traditional panels, other times preferring a full two-page artistic spread. Likewise, the style also oscillates between simple line work with solid black fill and complex drawings with detailed shading. For the most part, the book is black and white, but Una occasionally applies color for strategic purposes. At times, the tone is rather light; other times, it is particularly dark, such as one extended scene illustrating a vivid nightmare.

There are numerous symptoms of PTSD interspersed throughout Becoming Unbecoming. First and foremost is fear. In the first few pages, Una explains: “I became constantly wary. When I tried to sleep, as soon as I shut my eyes…or turned my back…I felt as though something was creeping up on me. Something under the bed or in the wardrobe. Soon I took to checking these places every couple of minutes. I had to keep checking because I couldn’t trust my own eyes and I couldn’t feel safe.” (p. 42). She eventually admits to sleeping with a pair of scissors for protection.

In addition to recurrent nightmares, Una experiences bedwetting, which surfaces while she is in high school. Self-destructive behaviors emerge, including drinking and doing drugs. She self-isolates, in part due to how others respond to what happened to her. She also avoids situations that might remind her of her past trauma: “Those who live with post-traumatic stress find seemingly random things deeply distressing. Things that tear open the traumatic wound. This is one of the reasons why, no matter how much you’d like to, it’s difficult to put a traumatic event completely in the past–behind you. Triggers can be sights, sounds, and sensations” (p. 85).

Becoming Unbecoming expertly reveals how sexual trauma can impact a girl’s development. When Una is molested as a young girl, she tries to piece together what happened to her. Due to her young age, she remains confused and becomes withdrawn. She does not report the abuse to others, as she doesn’t fully understand the circumstances herself. Later, when she again experiences sexual abuse, Una has learned, through social conditioning, that the best response is to thoroughly bury the experience.

Unfortunately, typical strategies for independent healing fail.  In therapy, Una does not volunteer her story, and the therapists working with her never specifically ask about it. As a result, Una acts out in ways that confuse and frustrate her friends and family. She carefully explains: “Finding out you are not even safe in your own body is deeply traumatic. Unfortunately, traumatized children can develop behavior that the adults around them perceive as delinquent, so there are punishment and further marginalization” (p. 45).

Una goes on to explore why people don’t like hearing sexual abuse narratives in general: “I suppose it makes people uncomfortable…it scares them. No one likes to be scared!” (p. 37). She also postulates that hearing sexual abuse stories makes people feel embarrassed and angry, which leads victims to avoid the conversation altogether and self-isolate, instead. Meanwhile, while folks don’t want to hear about abuse, they don’t want victims to bottle it up, either—an unfortunate catch-22 that leaves victims of trauma feeling like failures in their own treatment. Another variable that prompts victims to remain silent is the fear of stigma. Una describes the unavoidable labels placed on sexually abused women: “If she discloses abuse and is believed, she is a disturbed victim. If she discloses and is not believed, she is a disturbed liar” (p. 108).

Becoming Unbecoming is highly recommended for anyone wishing to understand how individuals, especially women, are affected by sexual trauma. Una never illustrates the sexual assault she experienced, which is noteworthy for those who are cautious of avoiding triggers themselves.