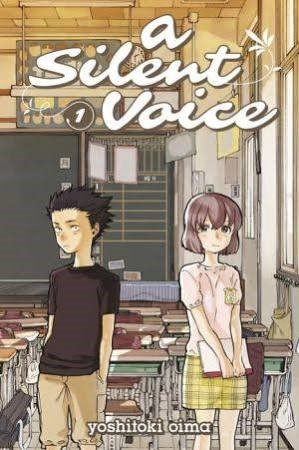 The first volume of A Silent Voice introduces us to two grade school children, Shoko Nishimiya and Shoya Ishida. The story is told completely through Ishida’s perspective. We quickly learn that Nishimiya is a girl who is deaf and is unable to properly communicate with any of the students around her. She makes up for this shortcoming by trying to be overly selfless and helpful so that she won’t be a burden to her class, but eventually the other students begin to resent her. Ishida actively bullies her as a way to impress his peers, and in an act of childish cruelty, he winds up stealing and destroying her hearing aids. While not alone in this act, when Ishida points out to the teacher that the rest of the class was just as complicit in bullying Nishimiya as he was, the class ostracizes him and begins bullying him, as well. Shortly after this event, Nishimiya transfers out of the class and Ishida resigns to his fate as a social outcast.

The book then skips ahead four years. As a teenager, Ishida has spent his school years in complete social isolation and has come to hate himself. Suffering from crippling depression, he decides he wants to take his own life,  but only after he properly apologizes to Nishimiya. It is only after he finds and reconnects with Nishimiya that Ishida comes to the realization that suicide is not the way out, and he decides to try his best to give life another try. The volume ends with Nishimiya and Ishida beginning a tentative friendship in the hopes of moving forward and healing old wounds.

In a story where one protagonist is the bully and the other is being bullied, Oima only writes from the perspective of the bully. Because of this, our narrator is an unreliable one at times (which Ishida fully admits), and while we get a window into his depression and struggle with suicide, we are never able to know firsthand how Nishimiya herself feels during the events that play out.

The artist makes a great use of space and framing to show isolation, both from the view of the reader and also from the view of the characters. Often, characters are off-center when placed on the page, creating frames with a lot of negative space. The most poignant of these scenes is when the two main characters reunite after four years—the author literally bridges a gap between them and then uses framing to hesitantly push them together as a visual representation of the inner hesitation both feel at this crucial meeting. Oima also uses her art style itself to express Ishida’s depression and detachment from the world, such as through the “X’s” that appear on people’s faces and the half-faded words in text boxes that appear when we see them from Ishida’s point of view.

Some of the typical manifestations of major depressive disorder are hopelessness, guilt, and suicidal thoughts. In the first volume, we see high school-aged Ishida completely resigned to the fact he will never have friends again. He detaches himself from everyone who might even want to get close to him, which is showcased by his interactions with fellow students who are now simply faces with “X’s” scrawled over them. Ishida also makes a complex suicide plan and sets out to meticulously follow through. He goes far beyond suicidal ideation and has a comprehensive plan. This is seen in the way he plots out exactly how he will die, marks down his remaining days on his calendar, and gathers up the wages he’s been saving for several months to give to his mother along with a suicide note apologizing for being such a bad son. Then he sets off to find Nishimiya as the last checkmark on his list. If not for the interaction with Nishimiya changing his perspective, it is very likely that he would have proceeded with his plan to end his life.

Yoshitoki Oima was only eighteen years old when she started working on A Silent Voice. As someone who experienced depression as a child, she wanted to bring it to light since it is not always visible on the surface and hides within the people we’d least suspect to have it. There are complex themes in her work that touch on the social pressures children face. She paints the bully in her story as just as complicated and sympathetic a character as the disabled girl he bullies. At times the reader will be startled by Ishida’s cruelty, especially when he’s so young, but the characters in Oima’s tales aren’t caricatures. Instead, the author writes raw, real, and very flawed human beings that could be literally anyone. Ishida isn’t a monster, but rather an unpopular child who seeks an opportunity to raise his own social status. Social acceptance is often the most important thing for a child to survive in school. After all, everyone yearns for a sense of power and belonging. Many children fall for this because of their inability to emotionally comprehend complex situations, and even small children know how intimidating a group can be to a single outsider. This series is interesting in the aspect that it gives us the chance to peer into the mindset of the bully, showing how his actions cause scarring, not only to his victim, but to himself, as well. By no means does it excuse his bullying of Nishimiya, but it opens the idea of how young minds try to cope with concepts that they don't understand.

Book series is recommended for ages 14+.