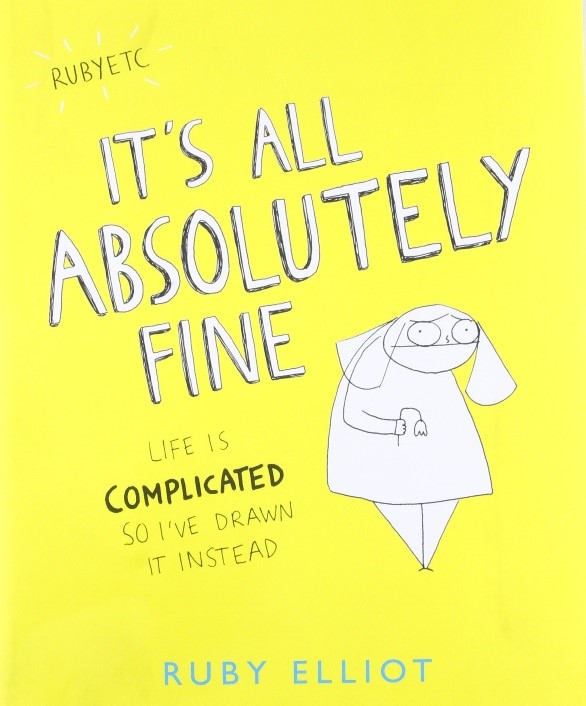 Ruby combines humor and personal insight in It’s All Absolutely Fine, a deeply humanistic portrayal of her experiences with mental illness. In the introduction, Ruby explains how she approached the project: “What I’ve essentially done for this book is draw about the stuff that goes on in my head, and stuff that goes on outside of my head, and how those things mush together in a bit of a strange and confusing way” (p. 8). The book opens with the topic of depression, which Ruby has experienced since she was 16. As the book progresses, we discover that Ruby has dealt with other psychological challenges, including anxiety disorder, manic episodes, and eating disorders. Individually addressing each of these topics, Ruby covers all the ups and downs, always concluding on a high note with insight as to how she found hope and relief.

The text in It’s All Absolutely Fine is divided up into alternating sections of prose and comics. Within each chapter Ruby pauses to write about the particular mental illness at hand, spanning about 2-3 pages. She then goes on to use comics to communicate what words cannot. All of the artwork is free-form—you will not find a traditional comics grid in It’s All Absolutely Fine. Time and time again, Ruby takes advantage of the medium to convey a powerful message by implementing chaotic line work to display anxiety or deflated images to accompany episodes of depression. In general, the illustrations are highly simplistic, which prevents distraction and allows the reader to focus solely on the message.

Through Ruby’s prose and comic art, we can see numerous examples of the many side effects of mental illness that she has experienced throughout her life. Of the four mental illnesses featured in the book, depression by far receives the most attention. In fact, the book begins with her saying, “I’ve been feeling sad since about 8 AM…7 years ago” (p. 10). In addition to examples of persistent sadness, Ruby provides evidence of self-sabotage. There is even a chapter entitled, “excuse me while I ruin everything accidentally on purpose” (p. 43). Ruby explains that the tendency to self-sabotage is probably based on a combination of unrealistic expectations and a desire for control, describing the phenomena as “undermining yourself because at least then the outcome is predictable—bad, but in my control” (p. 66). Ruby also conveys feelings of apathy, stating that she lost the ability to care about anything at all. Chronically low self-esteem is portrayed, such as through a comic in which she buys herself a coffee cup that just says “Worst” on the side. Ruby calls herself a “big bag of tears” (p. 7), a nod to excessive crying. Her eating and sleeping patterns are illustrated as a big, jumbled mess. Lastly, physical self-harm and suicidal ideation are also revealed.

Ruby’s coverage of anxiety disorder touches on a tendency to feel agitated and worried beyond what’s appropriate for a particular circumstance. She describes feeling paralyzed by uncertainty, which prevented her from competently dealing with life. When addressing bipolar disorder, she talks about manic episodes that produced insomnia and impulsive behavior. The chapter that focuses on her past eating disorders reveals she has dealt with anorexia and bulimia, as well as binge-eating. She deftly conveys to the reader how much these activities have taken over her life.

One would be hard-pressed to adequately describe all the humanistic revelations loaded into It’s All Absolutely Fine. Depression, in particular, is brought clearly into the light. First, Ruby admits to a tendency to compare herself to other, happier people. We learn that she keeps the curtains drawn to prevent being reminded of people who are living full lives. She notices her tendency to compare but admits to feeling as though she has to work twice as hard to reach others’ “normal baseline of functionality” (p. 34). Ruby reflects on how her emotions can only be turned completely off whereby she suppresses how she feels or completely on when the emotions take over. She wonders, “How on earth do I have my feelings without them having me?” (p.63). Just as compelling is her description of what it’s like to be depressed. It can be hard for folks to understand the extent to which it can take over a person’s life, so Ruby explains how it was for her: “This was as if an actual steamroller driven by a crazy grinning idiot had trundled through the door and flattened my entire life into a sad pancake of nothingness.” (p.11).

Ruby also dispels the notion that depression is self-gratifying. One passage is so poignant, that it will be shared here in its entirety: “No one wants to be lying there at 3:30 AM reciting the entirety of a PedEgg commercial verbatim as it plays for the fifth time in a row because you haven’t had the energy to change the channel. No one wants to be permanently on the edge of bawling because their reality is one of life is utterly futile and pointless. No one wants to feel so desperate that they end up in a psychiatric ward being asked to rate their mood on a scale of 1-10 as they watch the laces being yanked out of their shoes and taken somewhere out of reach.” (p. 12).

The hidden sides of anxiety disorder, bipolar disorder, and eating disorders are also considered. In regards to her anxiety, Ruby explains: “My brain is wired to run on tangents and ‘what ifs,’ and has a horrible habit of taking something small and snowballing it around the insides of my skull until it’s twelve times its original size” (p. 103). This allows her to go on to illustrate why her reactions to actual, big problems are so severe. Perhaps the greatest insight related to bipolar disorder occurs when she dispels common rumors in a series called “things bipolar ain’t” (p. 112). Lastly, when discussing eating disorders, Ruby points out that people would ask her how she could have an eating disorder if she wasn’t thin. After illustrating an encounter with a woman that asked that very question, she quips: “’And you don’t look like you own a toaster, McLady. I see no visible signs of toaster possession.’ Eating disorders are like having a toaster…you can’t tell whether someone has one or not just by looking at them, that doesn’t make sense” (p. 152).

One of the greatest advantages of It’s All Absolutely Fine is the healthy balance of darkness and lightness. Much of what Ruby has to share is sad, frustrating, and extremely complex, which may be difficult for some readers to easily digest—especially those who have never experienced these diagnoses personally. At the same time, though, Ruby accompanies the harsh realities of mental illness with positive affirmations and advice. This book is highly recommended for those who want to understand mental illness, but are deterred by the heaviness of the material. For those who do share Ruby’s diagnoses, they may delight in the relatability of her experiences.