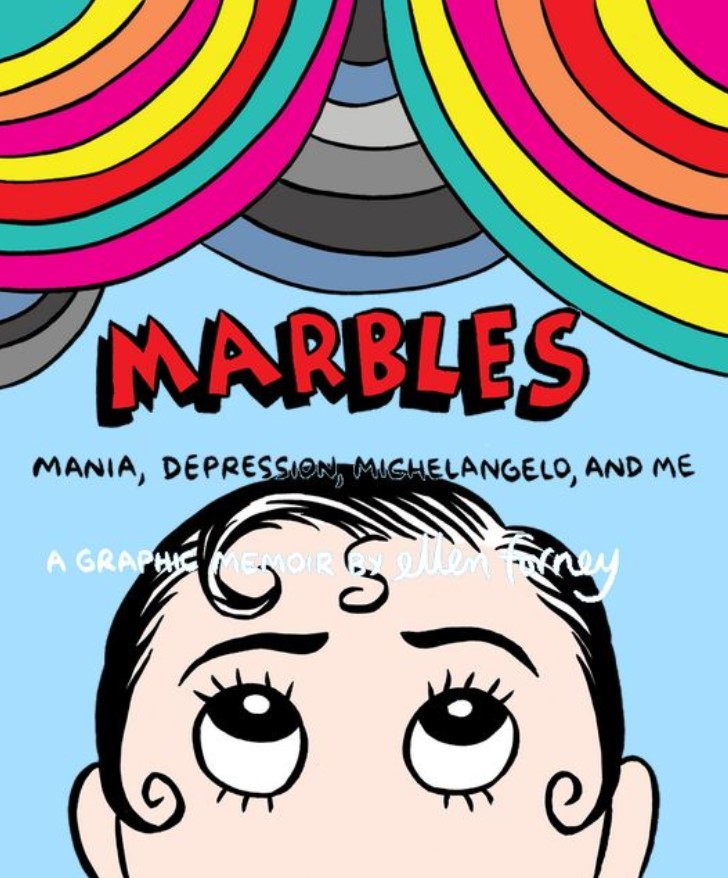 As the title suggests, Marbles: Mania, Depression, Michelangelo, & Me is absolutely rooted in the author’s mental illness narrative. Ellen Forney illustrates her lifelong relationship with bipolar disorder, taking the reader from diagnosis, through the ups and downs, and finally reaching the point where she finds balance and peace.

The book opens with Forney getting a full-back tattoo—the product of an electric vision—followed by her spontaneously kissing her tattooist and then walking out into the cold night, feeling everything was “magical, intense, and bursting with universal truth” (p. 11). Opening with this vivid portrayal of the manic side of bipolar disorder, we get a sense of what’s to come in the remaining pages.

Shortly thereafter, Forney meets with a psychiatrist and receives the life-changing diagnosis of bipolar disorder. Although she first fights the appropriateness of the diagnosis, she eventually comes to terms with the fact that this is, indeed, what she’s experiencing. Refusing medication, Forney resumes life as she knows it. We see her throw a big party and spend time with friends, all the while demonstrating classic markers for a manic state.

Although she initially refuses medication, the onset of a depressive episode changes everything. Forney begins taking lithium, which unleashes some unbearable side-effects. Working with her psychiatrist, Forney attempts to combat these side-effects by adjusting her medications and doses. Tinkering with her meds becomes a theme that lasts the length of the book, as does Forney's regular visits with her therapist.

The reader observes Forney navigate through several more cycles of depression and mania, each cycle revealing a new tactic employed by Forney to stay in control. We see her engage in cognitive behavioral therapy, start going to yoga, document her mood in a diary, and read the others’ mental illness narratives, all while trying to balance the responsibilities and engagements associated with her professional work.

After four years, Forney believes she has finally found balance. She states: “for better or worse, bipolar disorder is an important part of who I am and how I think” (p. 226). The book concludes with her having an imagined conversation with a previous version of herself, assuring her that everything is going to be okay.

Several artistic styles are employed in this book. Entirely illustrated in black and white, Forney primarily uses a simple, cartoony approach to capture and relay her interactions and conversations. This is broken up by more realistic interpretations of photos, plus imaginative pages pulled from Forney's sketchbook. While we do see an occasional traditional comics grid, much of the book is free from those constraints. Generally speaking, the artwork for manic states is heavy and chaotic, while that for depressive states is sparse and quiet. To sum up, Forney uses whatever artistic styling is necessary to describe in pictures what words cannot.

When considering the writing, “honesty” is a word that immediately comes to mind. Deftly balancing running text and dialogue, Forney describes bipolar disorder for what it is, delving into its dark and depressing realities, while laughing at its absurdities. That sort of humorous yet realistic approach allows her to deftly navigate and make approachable this rather complex material.

One doesn’t have to look beyond the first few pages of this book to find symptoms of bipolar disorder. Forney actually illustrates the criteria for manic and depressive episodes from the Diagnostic and Statistical Manual of Mental Disorders, then provides example after example of how those symptoms manifested in her life.

On the manic side, we see impulsive behavior, sleep disturbances, increased energy, agitation, talkativeness, distractibility, and poor decision-making. On the depressive side, we see weight changes, fatigue, guilt, loss of interest in activities, indecisiveness, and suicidal ideation. In addition to the stories that accompany these symptoms, we also get Forney's commentary on how she believes they are affecting her life, mood, and overall well-being.

Marbles is a classic example of how the comics form allows an individual to fully convey what it’s actually like to have a mental illness. Time and time again, we see word and art describe mania and depression in ways a textbook could not. For example, when Forney feels a depressive state looming, we see her clinging to the edge of reality as she’s dragged down by sadness. Similarly, when a manic state approaches, she has swept away in a wave of chaos.

One of the book’s themes is identity, especially how one’s perception of their identity changes in the wake of a mental illness diagnosis. After receiving her diagnosis of bipolar disorder, Forney laments the fact that her “personality reflected a disorder shared by a group of people” (p. 19). We see her struggle with feeling as though her identity was no longer unique and eccentric, a truly unsettling feeling for someone so independent and creative.

The “to medicate, or not to medicate” conversation is especially revealing. Forney states that “taking meds seemed like giving up” (p. 25), and admits to her therapist that properly taking care of herself makes her feel boring. We also see her lie to her therapist about her drug use, an experience with which many can identify.

From feeling overexposed when revealing her diagnosis to the comfort she feels when confiding in a friend with a dark sense of humor, Forney succeeds in showing us what it is really like to have bipolar disorder.

Marbles’ approachability makes it a recommended read for anyone wishing to increase their understanding of bipolar disorder. Additionally, readers with the same diagnosis may find her diverse approach to treatment insightful and encouraging