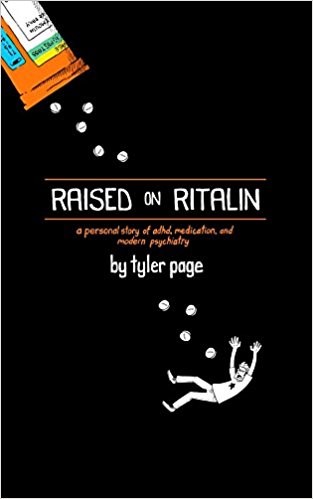 Raised on Ritalin explores the personal journey of Tyler Page, who was eight years old when he was diagnosed with ADHD. After taking the medicine for most of his childhood, Page weans himself off of Ritalin in his late teens, thinking he had grown out of his childhood condition. However, in his early twenties, his anxiety levels increase, and a doctor confirms that his ADHD had not faded away. From this point on, with his adult diagnosis, Page uses Raised on Ritalin to explore not only how ADHD has affected his life, but many of the current controversies on the subject, as well.

This is a little problematic, at times, and demonstrates some bias in Page’s work as he believes that diet and exercise, as well as the ability to work on his comics and channel his energy constructively, were the main forces that helped him control his condition. He believes these methods are better than medication itself, and he seems to be a strong advocate against drug use in general. This might lead to a false narrative with people struggling with ADHD. Sometimes, medication can be the best method of treatment and Page’s obvious dislike of drugs may be discouraging to fellow readers who have ADHD.

Page works in an interesting combination of excerpts from his own life, as well as the vast amount of research he has accumulated from hard science journals. For this reason, the book can be considered half science textbook, half memoir. Page painstakingly goes into great detail about what ADHD is, how it is diagnosed, and what it means for those who have it. Despite the research-heavy text, Page manages to sustain a very interesting tone that navigates between serious and light humor, depending on the situation. The art style is simplistic and usually supported by heavy bouts of research and doctor’s notes, which make this a true research-oriented tome. The characters are often sidelined by the huge amount of information on the pages, but we still feel a connection to them through Page’s ability to maintain a human element in his writing.

Symptoms of ADHD in children can include: being easily distracted, making careless mistakes with work, and having difficulty with organization. Not only does Page illustrate this in his book, but he also shows how the effects of the condition are poorly understood in adults. With a very sympathetic lens, he paints us a picture of how the condition can manifest in adults, such as by having mood swings, experiencing extreme impatience, and feeling unable to deal with stress.

Page brings up some very interesting points of conversation, especially for Gen X’ers who grew up in the age of medications. In the book, he mentions that 11% of children aged 4-11 in the US have been diagnosed with ADHD and that 6% are taking medication for it. He also discusses the problems many young people face being on hard medications like Ritalin and offers interesting holistic approaches to prescription drug use that seem worth discussion.

This text might best be recommended for people who suffer from ADHD, along with professionals who are looking for a more holistic approach to treating the condition. Doctors and medical representatives are not always seen in a positive light in this text, and the author’s viewpoints on drugs may be off-putting to some professionals.