Graphic Medicine Novels: A Child's Life and Other Stories 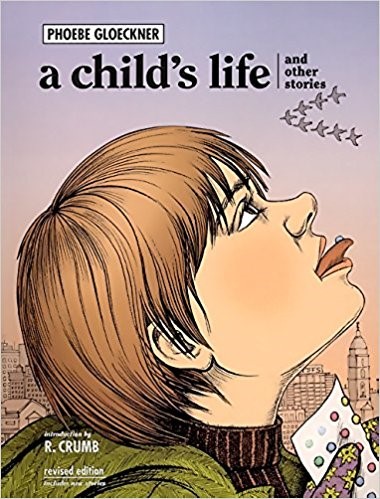 Phoebe Gloeckner is an artist, illustrator, and sexual abuse survivor.  In A Child's Life and Other Stories, Gloeckner alternates between autobiographical stories and fictional narratives. When referring to her own PTSD, she uses an alter-ego, Minnie. Throughout the book we see Minnie interact with key players in her life including her stepfather, mother, sister, and friends.

The book is composed of five different parts, each divided into several non-linear vignettes.  In "Other Childish Stories" Gloeckner moves into the realm of the surreal.  One story, "Magda Meets Little Men in the Woods," follows a little girl on a walk through the forest where she encounters different men who turn out to be a husband or a boyfriend in her adult future.  They frankly inform her of the grim reality of the impending relationships in which she and her children will be mistreated and abused.  "Teen Stories" contains the nightmarish "Minnie's 3rd Love", in which teenage Minnie has become enveloped in the seedy drug world of 1976 San Francisco.

Gloeckner’s central style point is the exaggerated representation of the male body and penis, as well as anatomical cross-sections, to demonstrate the oppressive power of patriarchy over women and challenge the objectifying gaze on women's bodies. It is also obvious that the author is influenced by fairy tales. These references act as a way to provide a second layer of understanding and significance to the stories. Because of their multiplicity, they challenge the idea of a coherent self and a single, truthful memory or a unique history by making the situations cartoonish and surreal. The artist deliberately uses graphic images as a means of getting direct access to people's emotions, and, as such, she uses incredibly explicit images at times to provoke outrage. This can also be found in the subtle way she uses her alter-ego Minnie, who looks exactly like a young Phoebe Gloeckner (her childhood photographs are presented on the last page). This is obviously intentional and another way to provoke her audience and make them uncomfortable.

Minnie frequently takes on the feeling that her world is a fragmented reality, and that there are competing versions of events. This is quite common in trauma victims. The movement between reality and fantasy is often described by people with PTSD as the space they occupy in order to survive the moment of violation. The theory currently stands that the experience of extreme childhood trauma leads to a dual consciousness or disassociation, and in order to survive emotionally overwhelming experiences, the individual splits off the memory of the traumatic experience from consciousness. As such, the dissociated memories are preserved in an alter-ego or latent state of consciousness. We see this theme reoccurring in many of the vignettes in this book.

In spite of picturing sex, A Child’s Life and Other Stories is not sexy. The author uses her work to create a dissonance between the sexualized visuals and the horror of the stories she tells by emphasizing systemic abuse through recurring parallel composition. In this way, Gloeckner's drawings are disturbing, because while the people in its pages are often depicted as gross caricatures, they have not lost what makes them human beings. The entire book can be seen as a rare, therapeutic way for the author to not only reclaim her sexuality from the abuse she suffered, but to also inform others with PTSD caused by sexual abuse.

A Child’s Life and Other Stories is recommended for survivors, family members and professionals who would like to learn more about how sexual trauma is processed and  internalized. The intended audience should be 18 and over, due to graphic illustrations  of abuse, rape and other intense sexual circumstances.