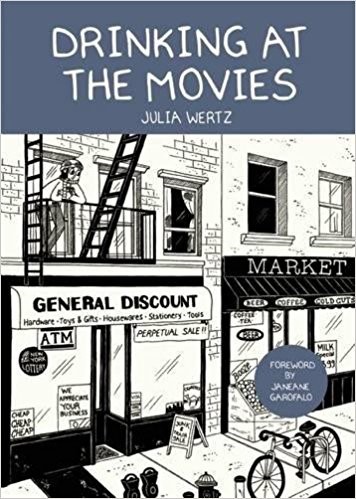 Drinking at the Movies is the comic memoir of Julia Wertz’s life in New York from 2007 to 2009, during which time she was a poor, desperate, whiskey-addicted comic artist just trying to make it. The story gives us a glimpse into Wertz’s life as she gets shingles and lupus, struggles to make the cultural transition from one city to another, and generally struggles with life. Working at a bar while trying to make it in the comic industry, Wertz begins to rely on alcohol as a way to cope from the more serious issues in her life, including her brother's mental illness and her stepfather's cancer diagnosis.

In one sequence, her avatar is attacked by a bunch of giant, anthropomorphic bottles of booze who throw her down "The Whiskey Well." That's followed by a long sequence in which Sherlock Holmes and Dr. Watson investigate the case of her missing brain, which periodically jumps out of her head and runs away on its little stick legs in search of alcohol. We continue through the misadventures of her day-to-day life until the book abruptly ends at a New Year's Eve party. There, as 2008 turns into 2009, the running text, acting like an omnipotent higher power of sorts, decides to tell her about all the good things that will happen to her in that year, including how she will quit drinking. The last panel has her turning to the audience and asking, “is this for the better or worse?” (p. 196) before the book simply ends.

Wertz’s self-caricature is pretty well-known to those in the comics industry. Boyish, slight, and trademarked with one eyebrow perpetually curled up while the other is twisted, her avatar is charming and ridiculously bug-eyed. Outside of that, the pen and ink drawings are fairly simplistic, but the interluding cityscapes are architecturally detailed and showcase Wertz’s talent for illustration. In that sense, Drinking at the Movies reads a lot like a comic strip, something Wertz enhances with her matter-of-fact headings like: "Just Another Monday" or "Living in Greenpoint." Everything about her comics has a charming crudeness to it: the figures, the jokes, and the situations she winds up in. This, however, serves to make punchlines funnier and ridiculous situations look even more absurd.

Anyone who suffers from depression will tell you that one of the biggest things the illness does is lie. It makes you question everything about yourself. This can be seen frequently in the book, as Wertz constantly berates herself for not being a real adult. She obsesses over the idea of what a perfect adult is, so her job, her relationships, and everything else are never seen as good enough. A perfect example of this is when she gets her first book published and manages to successfully make it in the comics industry. Instead of celebrating, she laments that “her twenties had now been reduced to an ISBN” (p. 76).

Wertz’s avatar is stereotypical for many young people in their twenties. She’s selfish, unmotivated, and to the outside eye, she can even seem like a loser. It’s hard to empathize with her at times because her preoccupation with her own problems and hardships often make her seem incredibly selfish, especially when she has to deal with her loved ones’ issues and pain. This is actually a very real and human portrayal of someone suffering from depression. The tunnel vision and “woe is me” whininess that Wertz’s character exhibits isn’t pretty, and it doesn’t make her a sympathetic hero. However, she could literally be any of us during our weakest moment, and that contributes to a powerful narrative.