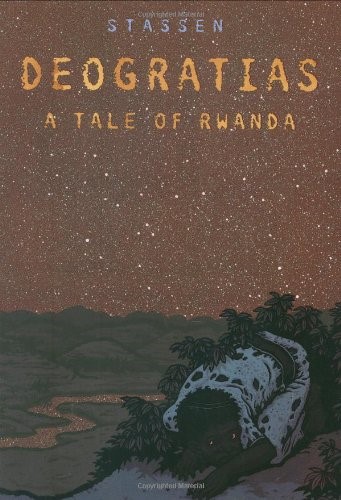 Deogratias documents the story of a young man tragically affected by the Rwandan genocide, which resulted in the brutal murder of 800,000 people in a few short months. For those unfamiliar with what unfolded in the small African nation in the mid-1990s, the book opens with a prose introduction of events. Then, Deogratias’s story begins.

Deogratias is a young man of Hutu ethnicity. What exactly happened to him before and after the genocide is slowly revealed through an oscillating series of flashbacks and present-day revelations. By the end of the tale, we learn that Deogratias was once a typical, hormone-driven kid. He had a crush on a Tutsi girl named Apollinaria. When she rejects his advances, he pursues her sister, Benina. It is evident he cares very much about both of them. When political events prompt the beginning of the genocide, Deogratias tries to save Benina from slaughter. Despite his best efforts, he is inevitably forced to participate in the genocide or be killed himself.

In the present-day narrative, Deogratias is suffering from crippling PTSD. It is revealed that he was intimately involved in the deaths of his friends. He is constantly on the prowl for banana beer, which temporarily eases his guilty conscience. At times, he imagines he has transformed into a dog. As he grapples with the trauma of the experience, he is urged to reunite with the same people who forced him to carry a machete. In the end, he is hauled off by police, accused of poisoning complicit outsiders.

Stassen’s gritty artistic style is one of detailed line work and shading with strategic use of color. Besides the introduction, the only text in Deogratias is dialogue. That said, the reader must connect the dots to figure out what happened to the protagonist. This process can be a bit difficult, as the story jumps back and forth in time, sometimes on the same page. What makes this easier for the reader, however, is the borders of the panels: panels with thick black borders indicate present-day events, while panels with white borders indicate flashbacks.

There is ample evidence that Deogratias has PTSD. Perhaps the greatest indicators are the ongoing flashbacks and unwanted thoughts. Clearly, Deogratias was haunted by the image of dogs consuming the flesh of his friends, as he exclaims: “My head is spilling out. Dogs! The dogs are eating the bellies” (p. 27). He also demonstrates self-destructive behavior, as can be seen in his constant pursuit of Urwagwa, which is banana beer. At the same time, he is mistrustful of others, so even when offered Urwagwa, he is concerned he will be poisoned. Deogratias avoids situations that bring back the memory of past trauma. He is perpetually afraid, even of the night. This may also be due to insomnia, another symptom of PTSD.

Deogratias is not an easy read. Due to the back-and-forth format, we have already developed empathy for Deogratias before the final revelation that he was involved in the murder of his Tutsi neighbors. Upon finishing the book, it’s natural to question whether or not that compassion is still appropriately-placed. As a result, the book leaves the reader with a bit of an ethical conundrum. This may be especially relevant for caretakers who work with individuals that were in some way involved in the development of their own PTSD.

There is no happy ending in Deogratias. In fact, the majority of the book is rather dark or at least foreboding.  While the book doesn’t reveal the full horror of the genocide, there are scenes of rape and murder depicted.  That said, it is recommended for a mature audience.