Graphic Medicine Novels: Persepolis 2: The Story of a Return 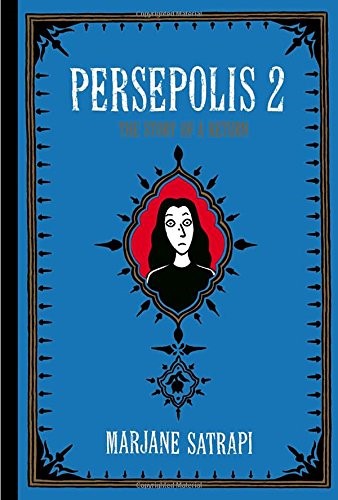 In Persepolis: The Story of a Childhood, Marjane Satrapi recounts what it was like to grow up in Iran during the Islamic Revolution. The sequel, Persepolis 2: The Story of a Return, focuses on Marjane’s young adulthood. When the book opens, Marjane has just arrived in Vienna, ready to attend high school far away from the fundamentalism and violence plaguing her home country. She attends a boarding school run by nuns but is soon expelled as a result of her outspokenness. Now on her own, she tries to establish herself as an independent young woman. Unfortunately, she is constantly perceived as an outsider. She does eventually make friends, which exposes her to a modern European lifestyle. A short-lived relationship ends in a breakup after she discovers her boyfriend has been cheating on her. Soon thereafter, she is kicked out of her apartment. A homeless Marjane then finds herself in the hospital with severe bronchitis. Feeling as though she has hit rock bottom, she returns to Iran.

Back in her home country, Marjane is shocked by the fundamentalism and violence she had previously left behind. To make matters worse, she is once again an outsider, perceived by many as being too Western. A deep depression sinks in, and although she attempts to treat it by means of medication and therapy, Marjane can no longer see a light at the end of the tunnel. She attempts suicide but miraculously lives. Seeing the meaning in her survival, she finds a new reason for living. The book concludes with her final departure from Iran and return to Europe.

Marjane Satropi’s artwork is admired by many and has become a model for many graphic artists. Her style is simplistic, featuring thick line work, solid black fill, and straightforward portraits. As this is an illustrated memoir, there is a significant amount of corresponding text. The narrative is divided up into chapters, making it easy for the reader to follow along.

Throughout the book, Marjane experiences bouts of depression, especially after breaking up with her boyfriend and shortly following her return to Iran. One symptom we see repeated is self-destructive behavior. Marjane’s relationship with illicit drugs is spurred by her desire to tune out the pain she’s experiencing. She admits that she prefers tripping to “…having to confront my solitude and my disappointments” (p. 64). Additionally, Marjane exhibits significant guilt and hopelessness. She only sees the negative, even to the point of denying others the opportunity to give her compliments. Perhaps the loudest symptom of depression presented in the book is suicidal ideation. Having given up on ever feeling better, Marjane drinks half a bottle of vodka and attempts to slit her wrists. When that method is ineffective, she swallows half a bottle of pills. Her incredible survival of both suicide attempts allows Marjane to find meaning in life.

Marjane’s story highlights how important it is for people at risk of developing depression to maintain two things: a strong support system and a firm grasp of personal identity. When a person loses their support system, depression can become exponentially worse. This is especially observed when Marjane and her boyfriend split up. She describes how she felt: “My breakup with Markus represented more than a simple separation. I had just lost my one emotional support, the only person who cared for me, and to whom I was also wholly attached. I had no family or friends. I had counted on this relationship for everything. The world had just crumbled in front of my eyes” (p. 79). Shortly thereafter, Marjane resigns herself to homelessness, eating out of trash cans and sleeping on the street. After returning to Iran, Marjane regains the support of her family but finds she has lost her identity. She explains: “My calamity could be summarized in one sentence: I was nothing. I was a Westerner in Iran, an Iranian in the West. I had no identity. I didn’t even know anymore why I was living.” (p. 118). The intensity of that feeling compels Marjane to attempt suicide.

Although the Persepolis 2 covers far more ground than Marjane’s mental illness, the chapters that relate to the topic are incredibly powerful. The book is highly recommended for those seeking examples of how isolation and loss of identity can impact a person’s mental stamina.